Up stupidly early for another day touristing.

The girls, as per, are staying in bed to get their beauty sleep. If skinny sleep was an option, I guess I might have stayed there too.

Instead, I’m off to explore… Australia’s Great Ocean Road.

I’ve had the most awesomest of days… Picture the scene. I’m cruising Aussie’s equivalent of Route 66 in a beautiful red convertible, the wind in my hair, the sun on my face, and a whole lot of horsepower throbbing beneath my butt. My tour of The Great Ocean Road took me out of Melbourne and around 185 miles of Australia’s more dramatic southern coastline, and the experience is not one I’ll forget any time soon.

Ask me to take a coastal drive back home and I’d probably laugh in your face. Dull skies, vandalised amusement arcades, gangs of hoodies on bikes and metal-detecting pensioners do nothing to get my juices going. But over here it’s something else entirely. Beautiful turquoise seas, huge blue skies, rolling green rainforests, and untamed beauty in all directions… Plus a whacking great strip of tarmac to see it all from, of course.

With the girls sleeping off hang-overs, I grabbed the nearest backpacker for company. This turned out to be Kristen, a very excitable Canadian girl who is wider than she is tall. She had to fold herself into the passenger seat, and changed gear for me twice with her thigh.

Like all epic adventures, The Great Ocean Road is a perfect trilogy and comes in three unique parts. The first, ‘The Surf Coast’, is so called due to the huge crashing waves just off shore and all the people in wet-suits riding them. We stretched our legs at the Apollo Bay Golf Course where we’d heard rumours that kangaroos lived amongst the bunkers. Here’s a fun fact. ‘Kangaroo’ translates as ‘I don’t understand you!’ in the local Aboriginal dialect. Captain Cook has apparently pointed at one when he arrived on these shores, and asked a native “What is that?” He’d assumed the response was its name. I read that online so it must be true. We found plenty of ‘I don’t understand yous’ wandering around the fairways, wide-eyed on clown-size feet, entirely unaware of the frustrated ball-whackers trying to play through. One had a baby in her pouch, but it wasn’t all tucked away neatly, poking its head out like you learn at school. It looked almost fully-grown, and was stretching and distending her tummy like a human teenager would if they decided to crawl back up their mum. It was like that scene in Aliens, but with hopping.

A bunch of miles further on, we stopped again when we saw koalas basking up in the trees. And yes, I mean ‘koalas’ and not ‘koala bears‘. Getting this wrong is one of the few things that will make an Aussie angry. The cuddly beasts looked totally out of it as they lazed above our heads, which makes sense because they were stoned. Boffins have proved that eating eucalyptus leaves has the same effect on their brains as smoking cannibis does to a human, which explains why they were giggling and munching snacks as they clung precariously to their branches.

The second section is ‘The Green Coast’ because it is submerged within rainforest, and soon we stopped to explore the Otway Ranges National Park. Here I discovered not only an abundance of over-dramatic nature (suicidal trees, anyone?), but also that Kristen’s boobs were so close to her knees that she played keepie-uppie when she walked. If she’d flashed me, she would’ve cleaned my shoes. The increasingly irritating Canadian (who uses the word ‘awesome’ like it’s punctuation) asked if it was my first time exploring the bush, and I couldn’t resist telling her, “Oh no, I had an experimental phase when I was younger.” It shut her up for a good few seconds.

It turns out that the rainforest is a bit like Centre Parcs, but without the igloo and all the annoying bikes, so it wasn’t long before we were back on the road. Soon we reached ‘The Shipwreck Coast’, and by mid-afternoon we arrived at the landmark I’d been looking forward to most. The Twelve Apostles. I squeezed between a hoard of Japanese tourists to step onto the viewing platform, with so many cameras going off I felt like I was on a red carpet. Words can’t do the sight justice though. Try Google. Abandoned monuments of rock staggered across the horizon, crystal water crashing against them in rainbow bursts. It was awesome. Shit, I mean SPECTACULAR. Damn girl’s got me saying it. Someone took a lovely photo of the two of us there, but I made sure to stand far enough away that I could crop her out later. I won’t be staying in touch.

On the way home, we pulled into a secluded bay called Loch Ard Gorge and explored some old smuggler hideouts. It was here that I learnt never to use the flash when taking a photo in a cave, no matter how phallic a stalagmite might look. A cloud of panicked bats erupted from the gloom and enveloped me, ferociously emptying their bowels in their rush to get out, and in my own scramble to escape what was effectively a shit-bomb there’s a small chance I may have emptied my own.

It was dark by the time we got back, by which time “Trees! AWESOME! Rocks! AWESOME! You’re covered in bat shit! AWESOME!” was starting to get a little tiring. Kristen had talked non-stop, and I can only assume she was breathing through her butt-hole. It’s made coming back to an empty room all the more jarring. Going by the state of the place, the girls have gone out clubbing because it looks like ground zero to a fashion explosion in here. So long as they don’t feel like they’re wasting their time in Australia I guess that’s all that matters.
Love Kev x
Replies to the guys:

Dad – Suicidal trees because they shed their bark to encourage bush fires.

Michael – Told you I would.

Alex – You can read about them in the Guinness Book of Records under, “Longest Time Sleeping Ever Recorded.”

A few weeks ago, before this backpacking malarkey began, I told Michael that at some point on my Australian adventures I would hire a fancy car and go on a roadtrip. I’d experience the thrill of the open road, clear the cobwebs from my brain, and generally drive very fast indeed. For some reason he’d laughed at the idea.

“You’d never do that. You’d panic about someone getting hurt. You think taking any form of risk might ruin everything. You’d rather play it safe.”

He wasn’t kidding either, in fact he seemed kinda angry. He said I often suffered from ‘analysis paralysis’. Said all I did was over-think things and end up doing nothing. I’m still not sure where it came from. I was leaving for Aus for goodness safe, how was that playing it safe? Then we snogged.

Well, that email showed him!

The problem is, it turns out he knows me better than I know myself. I’d talked myself out of hiring a car before I even got to the showroom. Manly men would ask me questions about horse-power and throttles and stuff. What about insurance? Mileage? Petrol? What if I looked stupid? Was it really such a good idea for me to drive something big, heavy and fast on a road at the edge of a cliff? I’d do a Thelma and Louise for sure.

Michael was spot on, I am my own worst enemy.

And so, despite what I told everyone back home, today was actually spent squeezed into the back of a tour bus with a dangerously obese Canadian. Kristen was most definitely real, and she was so unbearably positive for the whole trip she did my head in. I could learn from her though. She’s probably the largest person I’ve ever seen, it’s like she ATE Fat Camp, but her self-esteem is as gargantuan as she is.

“It wouldn’t be fair to all the skinny girls if I was this clever, awesome AND thin,” she told me at one point. “I see eating as a public service.”

I’ve decided to learn from her and try to look at myself differently from now on. No longer will I consider myself fat. I will simply be overflowing with awesomeness.

You hear that brain? Awesomeness. 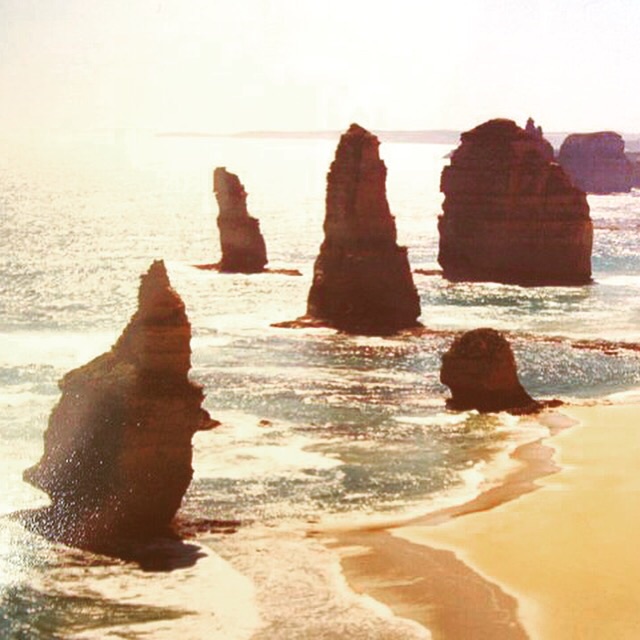 The Twelve Apostles. There aren't actually twelve of them.