The girls crashed in at 6am, cackling and shushing each other. Bev grabbed a carrier-bag and promptly threw up in it, then climbed into her bunk and threw up in it again. A great garbled geyser that almost turned her inside out. She was oblivious that the bag had safety holes in the bottom, and as she started snoring, bag hanging from her finger, two high-pressure streams of vomit-juice were spinning around the room. Which was unfortunate for the Germans on the bottom bunks. By the time the toxic stream had dwindled to a gloopy dribble, our German roommates had thrown all their belongings into their cases and legged it, leaving a trail of spewy footprints all the way up to reception.

I was still cleaning up when two new room-mates arrived.

“Sheesh, who did the liquid yawn?” said the man, wrinkling his nose as they entered the room.

At that exact moment, the bag slipped off Bev’s bright-pink fake fingernail. We watched as it fell in slow motion, before eventually slapping the floor and bursting open. It was apparent it had worked as a pretty effective sieve.
“I’ll go get fresh sheets,” said the lady, matter-of-factly.

Nancy and Steve, a Yorkshire couple in their early-twenties, both seem lovely but have come as a bit of a shock. They’re teachers. How on Earth can people my age be teachers? It still feels like I should be out getting taught.

The speed in which our roommates have been coming and going has made me determined to leave Melbourne within the week. So, after boil-washing all our clothes, I brought it up with the girls. They’ve left it up to me to arrange. We’re Champagne Backpackers, so… Would it be extravagent to book a spa break?

I my be little drunk.

We’ve been crawl-pubbing with our new roomies. Who knew teachers could drink sooo much? Multiple bars. ‘Revolver’ was my fave. All brick walls and leather sofas with a live-DJ on the dicks.

“I do love a bit of old-school vinyl!” I shouted to Bev.

She’s such a knob!

After many fishbowl cocktails, we ended up in a bowling nightclub called Strikes. What a place! The whole place was decked out with ultra-violet trimmings, which looks cool from a distance, but close up makes people wearing even a normal amount of makeup look scabby. Rachel looked like Freddy Krueger with a fancy up-do. She spent a good twenty minutes taking selfies under a UV bulb, sucking radioactive-pink cocktail from a fluorescent straw and dribbling it ‘seductively’ from her lips.

I’m no expert, but I don’t think it did. She looked like a burns victim on day release.

Turns out I am a pretty decent bowler when I’m tiddled, but my dancing didn’t earn me as many points. According to Teacher Steve, ‘big fish, little fish, cardboard box’ went out with the last millenium. It did, however, attract the attention of some boys in the next lane who had been gagging for an excuse to talk to Bev, and it turns out I was it. Jump to half an hour later, and somehow we’re all squeezed into their front-room playing strip-poker.

I say all. Of course, I mean everyone but me. Even with fish-tanks of cocktail in my stomach I’d refuse, and I ignored Bev’s plea to “lighten the chuff up”  and join in. This wasn’t lying out on the beach. NO WAY was I gonna sit in a crowded room full of strangers and remove my clothes. My belly would fold up over my knees like a concertina. I’m shit at poker anyway, and I’d be in my birthday suit before I’d even finished shuffling. So instead, I sat in the corner with a rum that could strip paint, and slowly disappeared into an under-stuffed beanbag.

Turns out my girls are proper sneaky strip-poker players. Nearly an hour in, and all they’d removed between them was a pair of shoes, a toe-ring, and a set of fake eyelashes. Teacher Nancy forfeited her game as soon as boyfriend Steve had whipped his t-shirt off, and she dragged him into one of the bedrooms for some uncomfortably noisy sex. And I don’t blame her, he is ripped. The gruntings coming through the wall had heightened the sexual tension dramatically, but unfortunately the poor local lads were out of luck. Soon all three of them were down to just their boxers, and with a horrified cry of “Oh man, I just saw your beans!” they called it quits. 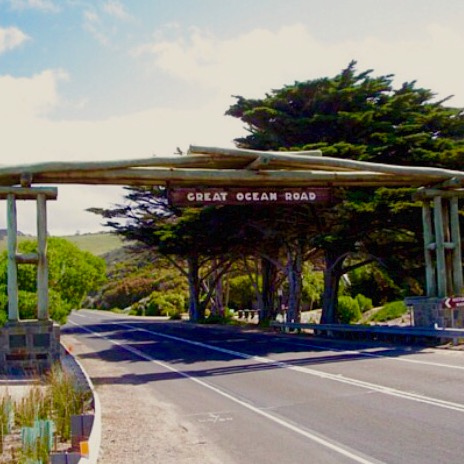 The beginning of yesterday's awesome drive on the Great Ocean Road!