Woke up to the startling, but not unpleasant, sight of a semi-naked German man squatting by my bunk and rummaging through his underwear. Perhaps sharing our room isn’t so bad after all? It has put me in an extremely good mood, despite the drink-induced headache coming from one of my eyeballs.

I’ve been ‘chatting’ to our new German roomies using hand-gestures and Google, and you know what? They’re not that different to normal people. They don’t know any English, and the only German phrase I can remember from school is “shnell schnell kartoffelkopf” which apparently means ‘quick quick potato head’ so fuck knows what my teacher was on.

Following a painful experience at last night’s comedy night, I’ve decided I’m going back to St Kilda today. I really want a tan! The only thing whiter than me in this country are the Calvin Kleins currently housing that German fella’s ample frankfurter. You don’t want the spotlight aimed at you at the best of times, but when the ‘comedian’ calls you albino and gets the whole room to howl at your face because it looks like a full moon it can be particularly excruciating.

“I’ve heard it all before,” I smiled sweetly, whilst dying a little inside.

Today was mostly spent on the beach and I’m happy to report my flashing white skin didn’t prove a distraction for nearby surfers, my moon-face didn’t cock up the tides and no do-gooders attempted to spoon me back into the sea believing me to be a stranded whale. Still no tan though.

Once back, and after a few cheeky voddies for courage, I asked Hamish if he wanted to go out for dinner with me. He agreed, but only on the understanding that it wasn’t a date.

I had hoped a slap-up meal might lead to some slap and tickle in return, but not a chance. He’d looked so uncomfortable just being seen alone with me in public that I ended up feeling a bit creepy. When the waiter lit the candle he was so quick to blow it out that he knocked over his shandy, and he managed to tell five complete strangers that there was “nothing go-go-going on between us” before we’d even g-g-got to the dessert. It was fucking insulting! I don’t want to push him into something he isn’t ready for or anything, but where’s the harm in a bit of inappropriate touching between friends? He had no problem with me paying for everything though, nor did he have any issues skipping straight back to Irish Karen the minute we got back, the little p-p-prick-tease.

I don’t know why I’m bothering. Why am I going through the motions of romantic dinners and having deep and meaningful conversations when I don’t want a relationship anyway? Not here, not now, and definitely not with someone who has more issues than Vogue. I could be getting up to anything this far from home. I should be out there grinding against total strangers and sowing my oats or something. Or, as Rachel says, “bumping uglies with other dirty bumders”. Instead, I’ve fixated on making the vicar’s virgin son my new boyfriend. Only me!

I DID spot another Gay in the hostel this afternoon, and this one didn’t need Gaydar to spot, just eyes and ears. The type that farts rainbows or something. He’s far too cute to approach sober, though. How do you say hi to a handsome homo when there’s all that extra judgement flying about? At least I’m safe with Hamish. If we ever did get jiggy, he’d have no one to compare me to. This new guy would. He looks like a right tramp.

I pointed him out to Bev earlier.

“See him? He’s definitely on my team.”

She turned so quick to stare that one of her hooped earrings flew off like a frisbee and landed on the pool table.

“How do you KNOW that?” She stamped her foot in frustration. “I keep getting it wrong!”

Turns out the guy she snogged last night had gone home with the barman, even though he’d ‘looked like a proper man and everything’.

She wasn’t even joking.

How can a Gay possibly explain Gaydar to a non-Gay?

“It’s body language, I guess. I must be subconsciously picking up on a million little gestures, the swing of an arm, the arch of an eyebrow, the pout of a lip…”

She looked at me thoughtfully. “Are you spouting bollocks?”

“No! It could be something as subtle as a little extra eye contact, or as obvious as a flamboyant hairstyle or outfit. Or, as is the case with the twink in question, he could be wearing a skin-tight vest-top with the words ‘I Love Boys Who Love Boys’ on it.”

I pointed at him again and this time Bev noticed his sexuality was actually written right there on his chest in bright pink letters.

“They’re usually harder to spot than that,” I’d laughed. “I struggle nowadays. The lines between straight and gay have got increasingly blurry since The Rise of the Metrosexual.”

“The Rise of..?” Bev looked confused. “Is that the Star Wars film?”

I blame meterosexuals for fucking up my Gaydar, actually. It used to be that a well plucked eyebrow or manicured nail could only mean one thing, but now man-scara, guy-liner and countless Beauty Products For Blokes have clouded the issue. Get it wrong and you could be facing an angry but well-groomed straight man.

“Approaching a gay guy with any certainty is a whole lot riskier than it was when I was last single,” I told Bev, wistfully. “Unless you meet up via the internet, of course, but some of us want a little more than a quick bit of cock and bum sex.”

“Besides, on-line profiles don’t work for me. They’d skip straight past my photo. I need a bit more time so that they can warm up to my face. Time to show off my fabulous charm and wit. Maybe some extra time to get some booze into me to raise my confidence… and into them to lower their standards.” I smiled, but I felt a bit sad. “I can’t do all that online.”

She looked thoughtful for a moment.

“Let me get this straight. I mean gay. You’re saying that you want to meet a guy you know is also a ‘player of the pink flute’, that you want time to be able to show him how amazing you are, and that you wouldn’t be so scared about it if you were a tad drunk first?”

I pouted. “Yup. What are the chances of all that happening at once, eh?”

“Oh, sweetie.” She kissed me on the cheek. “Quite high, really.”

I stared at her, confused.

“Why haven’t we been to any gay bars yet, Kev?”

I swallowed nervously. Oh. That.

Because I’m too fucking terrified, love. That’s why.

I had to stay up to SKYPE THE DOG. Mum text to say he’s been barking in my room since I left and she was threatening to cut his nuts off to ‘calm him down’. Calm him down! If someone cut my nuts off I’d be fuming! It was a weird five minute call, like looking at my old life through a window, and I only got to see his tail anyway as he spent the whole time looking for me behind the computer. 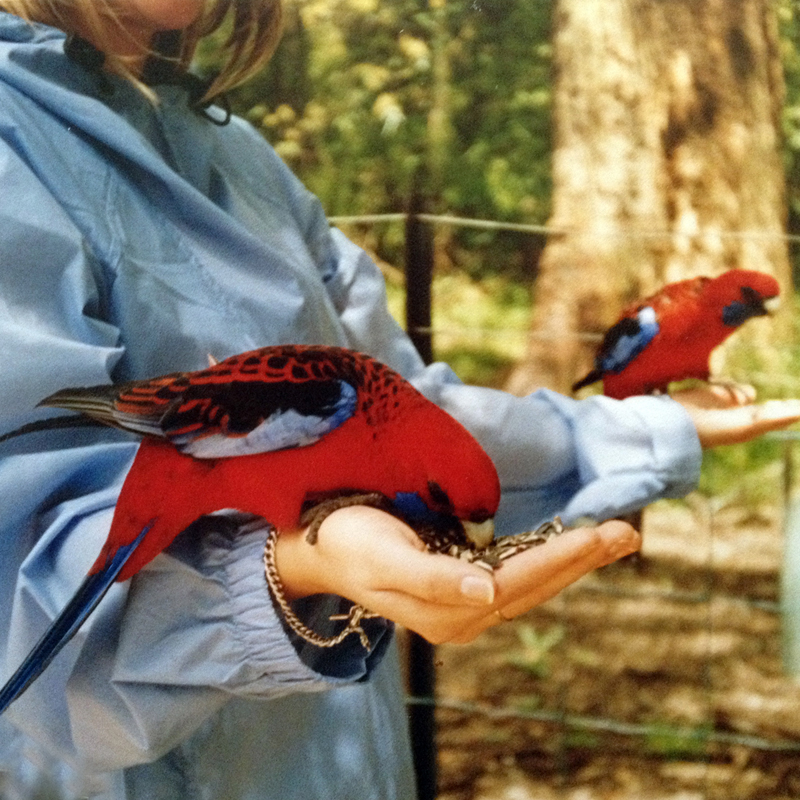 Rachel yesterday, just before one of the birds made a nest in her hair!