I woke up in my bunk in the exact same position I’d collapsed into it in about twelve hours earlier. Three puffs on that dodgy ciggie and I’d been ready to puke. I’d staggered into bed in a cold sweat and spent most of the night staring at the ceiling, convinced that Tetris blocks were lowering themselves at my face.

When I finally emerged from my amateur drug-den at midday, I found my favourite Scot waiting for me out on the beanbags.

I shrugged. I felt rough and couldn’t bring myself to care.

With a grin that was infectious, he handed me a cup of tea that he’d made especially. It was cold as he’d been waiting for me for hours.

“Not that I’m saying I’m-m Jesus!” he suddenly panicked.

As a thank you for yesterday’s heart-to-heart he wanted to make me breakfast. I refrained from pointing out it was lunchtime.

His p-p-pancakes were minging, but I ate them anyway because no one has ever cooked for me before other than mum, and Dad’s microwave. It was a sweet thing to do, but the same couldn’t be said for the pancakes as I think he used salt instead of sugar.

An hour later, we were squeezed into another dark corner, only this time we were looking at Sydney apartments on his iPad. No, we weren’t planning on moving in together, that would be a bit quick even for me. Besdies, he wasn’t interested cos I asked. Instead, he was helping me figure out where the girls and I should travel too next. If I leave it up to them we’d probably never leave the room, let alone the city.

We studied a map of the country. Outside of the big cities there seemed to be very few places that would have enough shopping malls and beauty rooms to keep the girls interested. Just countless tiny towns with names too ridiculous to be true. Humpybong, Tittybong, and Woolloomooloo. Seriously? Not forgetting Yorkeys Knob, of course.

To the west, Adelaide offered festivals, beaches, and a long coastal trip onto Perth. Alice Springs sat in the centre of the country, surrounded by desert and entirely cut off from everyone like a grumpy grandparent. At the northern tip, Darwin was well into monsoon season and offered temperatures that would see Rachel reapplying her eyebrows on an hourly basis. Or we could go east, where we’d hit Canberra and Sydney, before travelling up the coast to Queensland.

“Hmm… Queens Land. That sounds like somewhere we’d both fit in.”

In the end, unable to decide which direction to head next, I offered it up to the world and set up a Twitter poll. Let someone else decide.

An advert popped up on his screen for the Sydney mardi-gras in March. It showed two topless hunks and a lezzer apparently having an orgasm whilst sharing a rainbow hula-hoop. Hamish audibly gulped, turned the screen off and stood up to go. Then he paused.

“Um… Wanna go to the c-c-cinema later?” he blurted.

“Ooh, do you mean on a date?” I waggled my eyebrows suggestively. “Back row I hope!”

He kinda went a bit green.

That g-g-git only went and brought some friends with him. He’d turned up at the cinema closely flanked by Irish Karen and a northern lass called Nina, who I have imaginatively named Northern Nina. At first I thought it was a double date, because Karen has more than a whiff of mannish about her and is partial to a denim-dungaree, but she pulled me aside and laid down the law.

Fortunately, it doesn’t take a great deal to give me a thrill nowadays, so when Hamish slipped his hand into mine under the safety of darkness I couldn’t remember the last time I’d felt as excited. I barely noticed the film. People cheered at the end, but it might’ve just been because it was over. Aussies seem to be quite vocal in the cinema. I hate that.

We’ve made plans to meet up shortly at a bar over the road where Nina works, and I’m hoping it will lead to my first ever lock-in and a happy ending. Maybe I’ll get drunk enough to think getting naked in front of someone is a good thing, and maybe Hamish will get drunk enough to let me. In the meantime, I’ve nipped back to my room to ‘freshen up’ (change of undies and a wet wipe) and have found Bev and Rachel asleep in their bunks wearing yesterday’s clothes. I don’t know where they’ve been or when they got back, but I do know I might as well be doing this trip on my own.

Just back from drinkies. Bit tiddled. The night started promising cos he kept his hand on my knee for the whole time we were there, but when I walked him back to his room LIKE A TOTAL GENTLEMAN he shut the door in my face without so much as a peck on the penis!

After many many middies, the hoped for lock-in and even a couple of free schooners, I’ve officially upgraded Hamish from cugly to full-on cute. He is adorable, and he makes my heart ache as well as my balls. I think I’m gonna ask him to be my boyfriend! 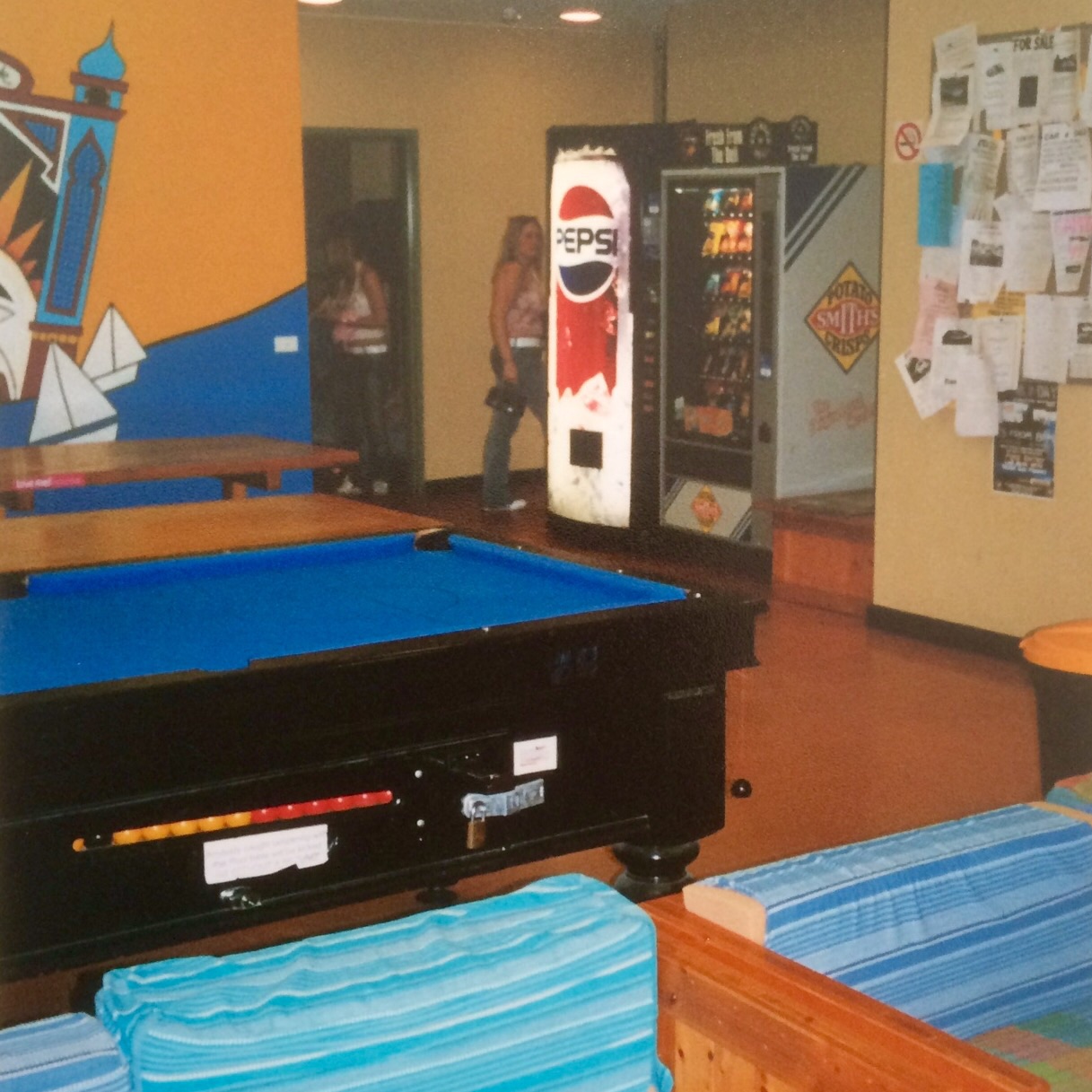 Hanging around the common room waiting for the girls. Again.