Pinch, punch, first day of the month and all that shit.

December is off to a good start. I’ve been looking forward to today’s ‘wine-tasting adventure’ for ages. OK, so it’s another coach trip where Bev and Rachel sit together as I ride behind them trying to join in, but at least this time there’s booze involved. I’ve forgotten what a decent pinot tastes like. If it’s not served in a cardboard cube on a two-for-one offer I’ve not even bothered recently.

“Inebriation is so in right now,” I told Bev. “I’m going to neck all the freebies and get totally discombobulated. The kidneys are evil and must be punished!”

She grinned enthusiastically. “I have no idea what you’re saying, so I’m smiling and nodding!”

None of us will be doing any of that swill-and-spit sampling malarky, of course. That’s one of the few things we do have in common. We swallow

We’ve spent far too much of our time in Melbourne staggering out of pubs and getting drunk, so today we boarded a mini-bus for a solid day of touristing, starting with… a wine-tasting tour! The Gurdies Winery didn’t skimp on the samples either. Chardonnay, riesling, pinot noir, shiraz, merlot (then a quick break for breakfast), sweet sherry, reserve port and muscat. The bus was a lot livelier when we left, though we only got a mile up the road before the entire coach had to disembark for a giant communal wee. Ironically, we’d pulled over in a tiny town called ‘Tooradin’, which I’m told is Aboriginal for ‘A Great Place For A Quick Stop’. You’ve got to hand it to those Aborigines. Their names are spot on.

Pleasantly half-cut on the grape, we headed to the ‘Wildlife Wonderland’ theme-park (the theme, I’m assuming, being ‘rundown and shitty’), where I hand-fed kangaroos (massive tongues), wallabies (aka kangaroo mini-mes) and emus (vicious buggers), petted Alpacas (the big black mammas of the sheep world), cuddled wombats (steroid-fuelled guinea-pigs with armour-plated arses), and chatted with Sam – an adorable great-crested cockatoo who had a vocabulary to rival many Aussies.

Still booze-fuelled, we went on to bravely frolic with wild dingoes, play Hunt-The-Possum and run away from some big-arse bird-eating spiders, before visiting a massive pickled-onion jar to press our noses up against a once great Great White Shark. Known as the Killer Of The Seas, this particular 1½ ton, 5 metre long toothy-bastard was still scary despite being slightly decomposed.

Next, we reached the dramatic southern coastline to witness Cowes Beach (lots of waves, no cows), Seal Rock (big rock, no seals) and The Nobbies (alas, no nobbies), until finally, as the sun set in a deep orange glow, we arrived at Phillip Island just in time to witness the nightly Penguin Parade. Tens of thousands of the tiny creatures marched up the beach as they returned to their families after a hard day’s work at sea. These ‘Blue Penguins’ are the smallest of the species, each around 30cm high, and as Bev correctly pointed out, “just because they’re the same size as a packet of chocolate biscuits, doesn’t mean they were made by McVities.” The little critters waddled and flapped and squawked as they marched in line beneath us. I found it a strangely humbling experience as we watched from a set of raised walkways. These tiny creatures were completely uninterested in our great looming presence as they went about their daily routine. Yet, unbeknownst to them, they had once managed to cause huge uproar for us giant humans.

You see, their species used to be called ‘Fairy Penguins’, a far more suitable name due to their dinky size I’m sure you’ll agree, until some anonymous old biddy in the 1970’s decided it was politically incorrect and would most likely offend us notoriously sensitive Gays. The PC Brigade adopted the cause, and all those addicted to outrage and with nothing better to do petitioned for the name to be changed immediately. The government, desperate not to be seen to offend anyone, complied and so Fairy Penguin, which the species had been called for centuries, was dropped like a hot turd and the new name was written into the textbooks. Meanwhile, the Gays hadn’t actually given a rat’s arse because they were too busy worrying about something else at the time, the shadow of a new disease called AIDS. No one else had been bothered about that though.

Can I just take this opportunity to say that interfering do-gooders really wind me up. If it affects you personally, fine. If it affects someone you love, go for it. March, campaign, petition, demonstrate, and good luck to you. But if you are just concerned that something somewhere might possibly cause someone offence at some point, at least ask the relevant person if they are offended before you go off on one. Speaking as a Gay, I can tell you with authority that it is ok to call something a ‘fairy’ if that’s the name of its species. I promise you it’s not homophobic. Honestly, I think we all need to be a little less sensitive to words, and a little more aware of the intent behind them.

It’s been a hellofa day, and we’ve managed to squeeze so much of the Australian experience into it. Exotic animals, awesome scenery and a shit load of alcohol. What a ripper.

Mum – Of course I told them.

Paul & Gavin – If you really want a fairytale wedding, I’ll show up and curse your firstborn.

I’ve been stuck with a right cockwomble all day.

Florence-Elizabeth Butterfield, a young cardigan-and-Croc wearing spinster-in-the-making, strutted onto the coach this morning like she owned it. She pushed my bag, deliberately placed next to me to avoid having to make pleasantries with a stranger, onto the floor and plonked herself down without an apology.

I was immediately infuriated.

For most of the morning, she quizzed me about what it was like to be gay. I’d come out to her after she’d pointed at a particularly handsome passenger and asked if I thought he was ‘a queer’.

“I can only wish,” I told her, in the hopes it would embarrass her into being quiet. No such luck. In fact, it had only made her talk more.

“Oh you’re one, are you? How terribly modern.” She patted my arm in mock-sympathy. “Apparently, it’s because you had no strong male figure in your life growing up.” She sniffed dismissively. “Your mum must have been very disappointed.”

“Excuse me?” I was surprised more than furious.

There was a burst of fury in front of me and Rachel’s face immediately appeared between the seats. “Wow, pipe the fuck down, Princess,” she said to my neighbour. “That’s MY gay you’re talking to.”

“Yeah!” Bev’s face appeared around the side of the seat. “And FYI, Kev’s mum is delighted he’s a homo. It means she’ll always be the most important woman in his life.” She looked to me, “She did actually tell me that once.”

“Well,” Florence began, adjusting her cardigan on her lap, “I once read that -”

Feeling myself burning in embarrasment, but happy the girls defended me, I said, “Got that?” in the most confident voice I could, then settled against the window and pretended to go to sleep.

Florence-Elizabeth, or ‘Fliz’ as she hates me calling her, is as pretentious as her name suggests. Burdened with a Roman nose that’s more Roman Empire in size (all the better for looking down at you from), she has an arrogant streak as wide as her jutting incisors and a nasal voice that is the vocal equivalent of a strobe-light to an epileptic. Hearing it makes my eye twitch. Vocal, opinionated, close-minded, she is the only person I’ve ever met who I’ve instantly disliked.

Worse, she followed me around all day, and when Bev and Rachel were out of ear-shot, she started picking on them too.

“Do you think those are skinny jeans, or are her legs just fat?” she said of Bev.

“Do you think that hair-style is actually intentional?” she giggled about Rachel.

“Do you think you could shut the fuck up about my friends?” I asked, feeling surprisingly defensive. Only I could moan about them.

She’d looked at me with wide-eyes and fluttering eye-lashes. “What? I’m only being honest!”

I hate that. People who confuse being mean-spirited and insecure with ‘being honest’. Grow the fuck up and quit being a douche-bag.

As a straight single female, she obviously felt qualified to tell me how gay marriage was a bad idea, and seemed disappointed when I didn’t bite. It’s like she gets off on confrontation. Perhaps surprisingly, it’s not a subject I’m particularly fussed about. Marriages don’t work in my family anyway, they’ve been ending prematurely for generations. Besides, a piece of paper really shouldn’t make a difference if you love each other, right? But I recognise the importance of equality, and it’s nice to have the option if I ever want it, so I calmly asked her to explain her reasonings. Just why do two guys or girls getting hitched offend her in any way?

“Seriously? That’s your argument? You should be a lawyer.”

“I’m allowed an opinion. You should try to see things from other people’s perspective once in a while.”

I gave her my best stink-eye. “I can’t see anything from that particular perspective, because I can’t get my head that far up my arse.”

She wasn’t even a little offended. In fact, she giggled.

I’d stared at her, open-mouthed. “Fairy? Do you see me packing wings and waving a fucking wand?”

Now THAT pissed me off. My friends can call me that, maybe even Rach, but Fliz hadn’t clocked up enough buddy-time. Despite this, when we finally returned to the hostel, and Bev and Rachel went straight to bed, who else did I have to join me if I wanted a night out? Naturally she agreed, probably sensing that the idea of her company made me miserable, and before long we were grabbing a tram into town.

“Are you seriously planning on wearing those out?” I asked, pointing at her feet.

“I can see all your self-respect leaking out of the toe-holes.”

She’d frowned at that. “Say, you’ll know the answer to this, Kev. Why do fat people always think they’re funny?”

I rolled my eyes. “Fuck all the way off, Fliz.”

She took my arm and laughed. “So, where are we going?”

“I know the perfect place.”

I took her to Strikes, where I knew she’d have to change her hideous footwear.

Two games of ultra-violet bowling later and we’d finished all our smuggled in wine and were onto the cocktails. By the end of the night, rather surprisingly, we found ourselves slow-dancing down one of the lanes to an old Celine Dion song.

“I’m sorry I slagged off your shoes,” I whispered in her ear. “I thought you already knew how shit they were.”

They say keep your enemies close? Well, I couldn’t have been any closer to this one without penetrating the bitch. 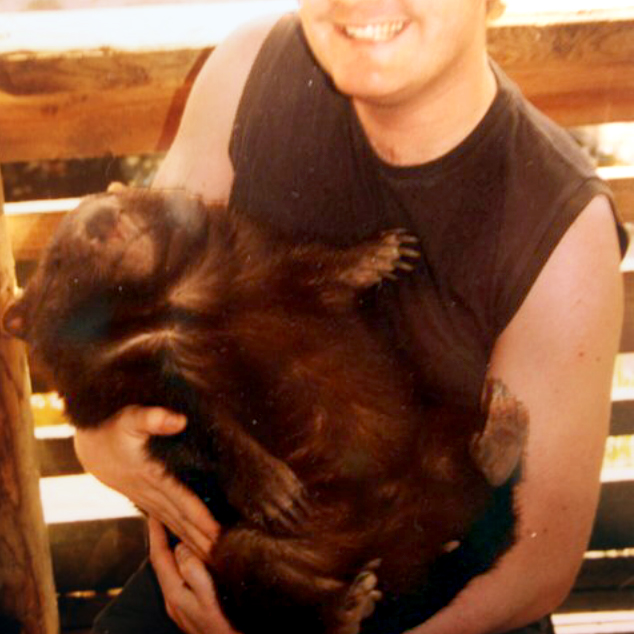 I cuddled a wombat! Interesting fact: they have giant armour-plated butts!