I woke with a jump and a barely-contained scream as I heard someone shuffling about in our room. I sneaked a peek and watched an angry skinhead drop a grubby rucksack on the floor, trip over one of Bev’s bras (damn booby trap) before storming out again in an eye-watering cloud of what Rachel refers to as “Bobby Orange”. I reckon he was expecting a bunk, and so wondered why all the spares look like they’re hosting a rummage sale at Miss Selfridge.

This dormatory is technically supposed to sleep six and is positioned in the hostel basement, next to the communal and kitchen areas. It has just a single barred window near the ceiling, and the view of the street is at ankle height. It means we get to criticize people’s choice of footwear from the comfort of our top-bunks. Grabbing a half-drunk bottle of vino from one of the empty beds, I enjoyed some rare peace as the girls slept, and watched the number of passing shoes outside increase as another day in Melbourne’s Central Business District dawned. As they reached a stampede peak, just inches from her head, Rachel woke up. Wiping sleep from her eyes, she mumbled, “Bleedin’ ‘hell. I thought I was the Lion King takin’ me last breath.”

Now that I am a veteran backpacker of at least two days, I feel fully-qualified to pass my thoughts on to you about hostel life. For instance, I’ve learnt that staying in one doesn’t mean you have to scrimp on personal hygiene, although I’ve certainly met people here who use it as an excuse. A prime example being the man who took the bunk below me earlier today, more’s the pity. Washing machines, tumble driers and bathrooms are all on hand at The Friendly Backpacker, so you don’t have to transform into a bearded, grubby hobo unless you really want to. The toilets are clean, although the paper-dispensers seem set to provide one sheet at a time and, let’s face it, some bums need more. The showers aren’t communal, much to my relief, however the bathrooms are, and I must confess I’m still not comfortable sharing a mirror with a confused Alpha male who doesn’t speak my language. I can’t be the only man who moisturises, surely? The look I got from one hairy man-panzee this morning, you’d think I’d pissed over his cornflakes. Which, come to think of it, is something that could well happen in the kitchens here. With residents spread over three floors having to share a single oven and fridge, it can easily come to blows at peak times, so we tend to avoid the problem altogether and eat out.

I’ve determined the residents here come in two distinct types, ‘Trampy’ (bearded and stinky) or ‘Champagne’ (glamorous and soap-loving). Each of these groups contain three distinct sub-categories, based on the individual concerned.

Brash-packers: Loud extroverts who barrage you with a host of questions before they’ve even introduced themselves. “Heytheredarlinwhatsyournameandwheredyacomefrom?” They rarely wait for an answer before moving breathlessly on to their next topic.

Blush-packers: Folks who smile timidly in a way they hope translates as, “I’m a nice person but I’m shy, so please talk to me first because I won’t come to you”.

Bitch-packers: Those rude bastards who ignore everyone. They can usually be found wearing headphones like their own personal ‘Do Not Disturb’ sign, with music playing just loud enough to be heard from across the room.

Due to the fact that I still bother to wash, and find initiating a conversation a little tricky, I can proudly declare myself to be a Champagne Backpacker of the Blushing variety. The rosé champagne of the backpacking world, if you will. But all types, whatever their group or category, flock to the hostel’s communal area where they get to read, doze, chat, and generally exist with others around them. It seems that company is one luxury no one is prepared to give up on. Not even the bitch-packers.

Some of my fellow hostel residents describe the United Kingdom as a dirty, crowded little island, which I find hard not to take personally. However, most native Aussies seem to love the UK. I’ve had a number of compliments from them on my accent, telling me it’s adorable. Even sexy. So, obviously I’ve taken to speaking clearer and more eloquently than I ever did back home. It’s already rewarded me with a complimentary muffin at Starbucks, and a pint – sorry, I mean schooner – on the house at the Elephant & Wheelbarrow. It seems being a Brit is officially awesome when you’ve in Aus. Or, as I told the guy who served me at lunch-time, “Gosh, I am so very fortunate to be British. It seems to go down awfully well with you jolly nice Australian chaps.”
Love Kev xx

Dad – Just skip over any ‘references’ that makes you feel uncomfortable, or delete me altogether. Your choice.

Michael – No, I haven’t needed the practise yet. 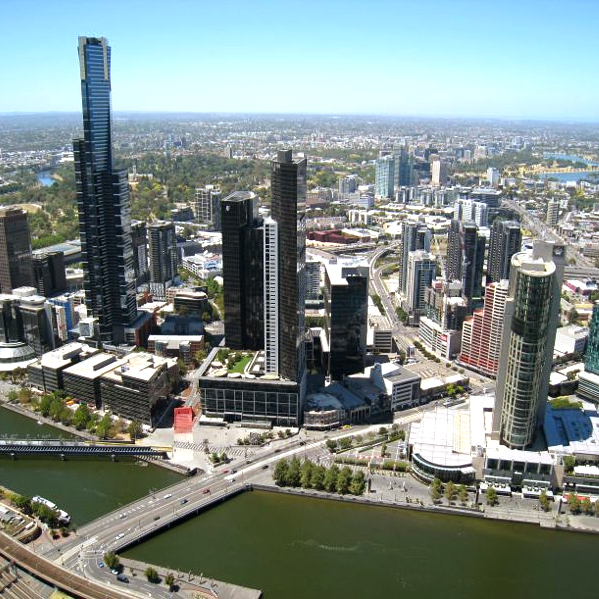 Melbourne from the Observation Deck. Love this city!